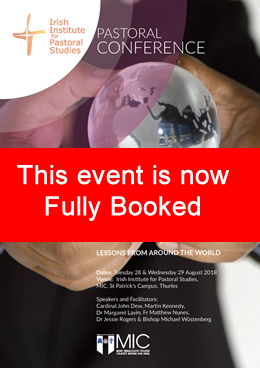 7.30pm Mass in the Cathedral of the Assumption, Thurles.

9.30am Lessons from Liverpool,  The Experience of Widnes as a Witness to Team Ministry (Rev. Matthew Nunes Episcopal Vicar for Formation, Archdiocese of Liverpool)

12 noon Lessons from Canada,  Rites and Responsibilities: The Role of the Clergy and the Laity in the Catholic Church, (Dr Margaret Lavin, Professor Emeritus at Regis College, Toronto)

Cardinal John Dew: Cardinal Dew is the Archbishop of Wellington and Vice President of New Zealand’s Catholic Bishops Conference. As Cardinal, the Holy Father has also appointed him to the Ponti?cal Council for Promoting Christian Unity, the Congregation for Divine Worship and the Congregation for the Evangelisation of Peoples. He is the New Zealand Catholic Bishops’ Conference’s Bishop for the Catholic Bishops Committee for Ecumenism. During his priestly ministry he has served as a formator at the National Seminary and ?ve years in Youth Ministry. Cardinal John enjoys cooking, gardening, and walking.

Martin Kennedy: Martin works freelance as a trainer and facilitator with church and community groups, and has recently served as Pastoral Programme Coordinator for the World Meeting of Families, coordinating the delivery of resources to dioceses. Martin facilitated the Limerick Diocesan Synod in 2016. Among his published texts is: Ministry Now – New Approaches for a Changing Church.

Dr Margaret Lavin: Margaret is professor emerita at Regis College at the Toronto School of Theology, University of Toronto. She is an accomplished author, sought after speaker and retreat director. Her area of specialty is sacramental theology and the Second Vatican Council. Margaret is presently the Assistant to the Provincial of the Canadian Jesuits for Partnership Formation in Ignatian Spirituality and Jesuit Mission. She has a passion for drawing people into dialogue on the relevance of faith and church in today's culture. She is the author of Theology for Ministry.

Fr Matthew Nunes: Matthew is a priest of the Archdiocese of Liverpool. In 2006 he was appointed as parish priest of 3 parishes in Widnes near Liverpool. The addition of a further 2 parishes sparked his interest in change management, facilitation and team work as a way of responding positively to the challenge of changing parish realities. He is currently the Episcopal Vicar for Formation in the Archdiocese of Liverpool.

Dr Jessie Rogers: Jessie lectures in Scripture at the Pontifical University, St Patrick’s College, Maynooth and has trained as a spiritual director in the Ignatian tradition. She is a member of the Godly Play College of Trainers. Jessie facilitated the Limerick Diocesan Synod in 2016. Jessie lives in County Limerick.

Bishop Michael Wüstenberg: Bishop Michael was ordained priest in Germany in 1982. After ten years of parish ministry he went as fidei donum priest to South Africa to work in one of the Homelands in the Diocese of Aliwal. The focus of his pastoral work was on Small Christian Communities (SCCs) and the development of Community Ministries. He has completed a doctoral thesis on Lay-Ministries (the example of Funeral-Leaders), worked with the Lumko Institute and lectured on Pastoral Theology in the seminary in Pretoria. In 2017 he retired early due to health complications.

If you require further information about this Pastoral Conference, contact Rev. Dr Éamonn Fitzgibbon, Director of Irish Institute for Pastoral Studies by: 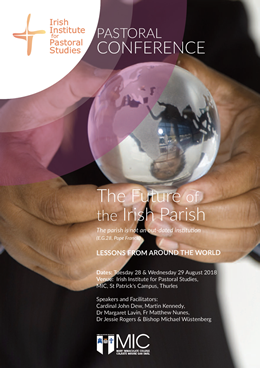 Godly Play is a gentle way to invite children to listen to God’s word and explore its meaning for their lives. It does not tell the children what to think, or give them ‘the right answer’, but humbly sets up a safe and sacred space in which to proclaim Holy Scripture in a way that facilitates children’s hearing, understanding and response.